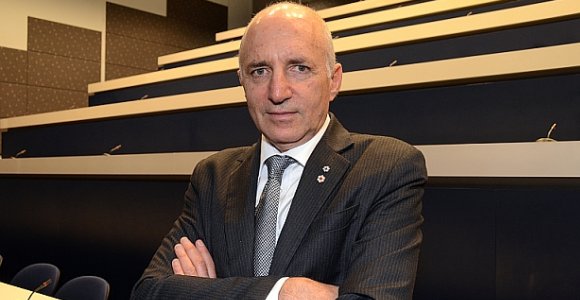 The Michael Smith Foundation for Health Research (MSFHR) today honoured renowned British Columbia scientist Dr. Michael Hayden for his outstanding contributions to genetic research at a special presentation hosted by UBC’s Okanagan campus.Hayden was presented with MSFHR’s Aubrey J. Tingle Prize in recognition of a career that places him among the world’s most respected authorities in the study of genetic diseases. The $10,000 prize, created in honour of MSFHR’s founding president and CEO, is given annually to a British Columbia clinician scientist or scholar practitioner whose work in health research is internationally recognized and has significant impact on advancing clinical or health services and policy research.

“Dr. Hayden’s many contributions to genetic research have positioned BC as a global leader in this field and demonstrated our province’s capacity to produce world-class research.” said Dr. Bruce Clayman, MSFHR interim president and CEO. “MSFHR is proud of the role we play in supporting researchers across BC to continue the tradition of excellence started by scientists such as Dr. Hayden. We’ve invested nearly $2 million in building the Interior’s capacity for health research, funding 13 awards to individual researchers and research teams with an Interior focus.”

Hayden’s acclaimed breakthroughs in medical genetics include the development of a predictive genetic test for Huntington’s disease and the discovery of the role played by genes in coronary artery disease and adverse drug reactions. He has also conducted innovative work into predictive and personalized medicine and recently provided the first evidence of a potential cure for Huntington’s disease.

“I am very grateful to MSFHR for this award,” said Hayden. “British Columbia’s health research community is internationally respected, and I am truly honoured to be recognized as a contributor to this success.”

Following the award presentation, Hayden delivered a lecture to students in UBC Faculty of Medicine’s Southern Medical Program on the subject of clinical phenotyping in gene and drug discovery.

“Dr. Hayden’s accomplishments offer a prime example of the exceptional calibre of health research occurring right here in BC,” said Dr. Allan Jones, regional associate dean of the Southern Medical Program at UBC’s Okanagan campus. “We are very pleased for Dr. Hayden to share his acclaimed work with our students who will be among the health leaders of tomorrow.”

Hayden is director and senior scientist at the Centre for Molecular Medicine and Therapeutics (based at the Child and Family Research Institute) and University Killam Professor in the Department of Medical Genetics at the University of British Columbia. Among his many awards and recognitions, he has received the prestigious Canada Gairdner Wightman Award and was recently invested into the Order of Canada.

Hayden is the second BC researcher to be honoured with the Aubrey J. Tingle Prize. The inaugural prize was presented to HIV/AIDS researcher Dr. Julio Montaner.