Dr. Gerhard Schumacher (fourth from the right) with the Operating Room staff at Kapsowar Hospital in rural Kenya.

Dr. Gerhard Schumacher, Site Co-Leader, Undergraduate Education, Kamloops, first joined the Southern Medical Program (SMP) in 2007 in an effort to develop new fourth-year electives at Royal Inland Hospital (RIH). At the time, medical students were seldom on the wards with only a handful of physicians offering electives.

“Initially, we weren’t thought of as a teaching hospital,” says Dr. Schumacher. “Teaching was not a big part of the culture; however, UBC recognized the need to develop more capacity.” In a span of two years, he worked with RIH physicians to expand fourth-year offerings from five to eighteen different electives.

In 2009, the question was posed whether Kamloops could offer a full third-year traditional clerkship program for SMP students. A self-described optimist, Dr. Schumacher thought of course they could and immediately began discussions with a group of physicians who could help deliver the program.

A short while later, Dr. Anise Barton, a general surgeon at RIH was recruited as Site Co-Leader, Undergraduate Education and together they worked with physician champions to pilot each of the ten discipline rotations. In 2012, they were able to offer their first prototypical year, a full pilot clerkship with four third-year students.

“The students were keen learners and the physicians really enjoyed having the constant presence of students on the wards,” says Dr. Schumacher. “By and large, we received a strong endorsement from the students which reinforced our ability to offer a real quality program.”

Since then, the third-year clerkship has grown in popularity amongst SMP students which offers a mixture of both traditional and integrated community models for a select cohort of six students. This past year, the program was oversubscribed with more applicants than spots available. Dr. Schumacher acknowledges the tremendous work by Deb Lingel, Years 3 & 4 Program Assistant as a key factor in the program’s continued growth and success.

Over the course of his career, Dr. Schumacher and his wife Janie, a Biology instructor at Thompson Rivers University (TRU) have pursued a passion for international work with underserved populations. Their volunteer work has lead them to stints in Cameroon, India, Papua New Guinea, Guatemala, and several trips to Kenya.

This past fall, he accepted a request from Kapsowar Hospital in rural Kenya to become the hospital’s new Medical Director. He and his wife will serve at the same hospital they have developed a true connection with.  His work will focus on supporting the hospital’s much needed facility expansion, quality of care improvements, and increasing efficiency. His wife leaves behind her teaching position at TRU to continue her work teaching anatomy and physiology at the hospital’s nursing school.

“Dr. Schumacher has been an instrumental leader for the SMP and helped developed an outstanding clerkship program for our students, says Dr. Allan Jones, Regional Associate Dean, Interior. “He has also played a key role in building the medical teaching community in Kamloops which now includes over 150 physicians.”

The evolution of teaching at RIH and in the community has helped foster the growth in residency training including the new Kamloops family medicine residency which launched last summer. “It’s been a pleasure to be involved with a program that has momentum,” adds Dr. Schumacher. “I’ve always felt excited in the progress that has occurred every year and feel it will continue to grow.” 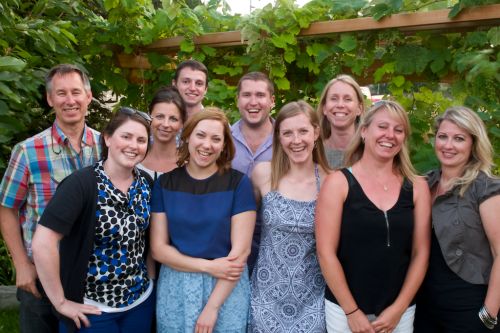