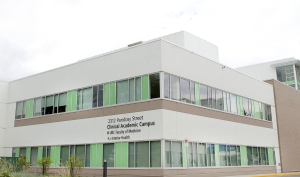 Dr. Graeme McCauley is a respirologist and Clinical Assistant Professor with the Faculty of Medicine’s Department of Medicine, Division of Respiratory Medicine. Dr. McCauley completed his medical degree at UBC (MD’74) followed by a rotating internship at Royal Victoria Hospital in Montreal. He returned to UBC to complete a year of anesthesiology training and spent five years in general practice and anesthesia in Williams Lake, BC. He then returned to complete training in respirology and critical care at the University of Alberta. For the past 33 years, he has worked at KGH where he also serves as Chair of the Department of Medicine. Dr. McCauley is a fellow of the Royal College of Physicians of Canada and member of the College of Physicians and Surgeons of British Columbia.

Dr. Gina Polley is a general internist at KGH and former chief resident of the University of Alberta’s General Internal Medicine Subspecialty Program. Dr. Polley completed her medical degree at University of Saskatchewan and internal medical residency training at the University of Alberta. Originally from Kelowna, she has recently completed her residency training and returned to the Okanagan. Dr. Polley is a fellow of the Royal College of Physicians of Canada and member of the College of Physicians and Surgeons of British Columbia.

Dr. Kirk Lawlor is a vascular surgeon, KGH Division Head, and Clinical Assistant Professor with the Faculty of Medicine’s Department of Surgery. Dr. Lawlor completed his medical degree, surgery residency, vascular surgery fellowship at the University of Western Ontario (UWO). Additionally, he holds a Master’s of Education from the University of Toronto. Prior to beginning work at KGH in 2010, Dr. Lawlor worked at the London Health Sciences Centre University Hospital where he served as the Program Director of Vascular Surgery. Dr. Lawlor is a fellow of the American College of Surgeons and member of the Royal College of Physicians and Surgeons of Canada (RCPSC) and BC College of Physicians and Surgeons. For the RCPSC, he also serves as Subspecialty Committee Member and Examiner for Vascular Surgery. Dr. Lawlor can be reached at 250-878-6113 or kirk.lawlor@interiorhealth.ca.

At the same time, the SMP would like to acknowledge the outstanding work of Dr. Katharine Smart as the outgoing Year 4 Electives and PMP Course Lead. Dr. Smart joined the SMP in 2013 and made great strides in developing the Year 4 Electives program in the BC Interior in addition to leading the development of the Year 4 PMP course for SMP students. This past month, she relocated to the Yukon with her family and now works at the Klondyke Medical Clinic in Whitehorse.